Get performance experience. Work on your confidence.  If you’d like to sing a Broadway song or perform a monologue or scene, email Liz at LFredette@MacGuffinTF.com to get a place on the performance list. 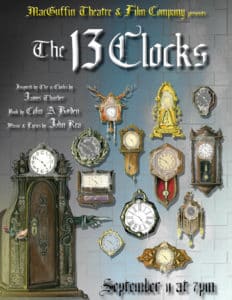 The 13 Clocks – A Musical Tale
Book by Colin Borden, Music and Lyrics by John Rea
Based upon the book by James Thurber
Directed by Colin A Borden

Shot last fall during the pandemic, our virtual musical The 13 Clocks is finally here! Inspired by James Thurber’s book, the story follows a down on his luck musician who gets swept up in an adventure to try and help a kidnapped princess who’s protected by a cruel and lethal Duke who wants to marry her himself. It’s filled with colorful characters including a scatterbrained tinker, a broken fairy, a cursed woman who cries jewels, a nasty henchman, a spy, ghosts, two hucksters, and a giant, eight-eyed monster called the Todal.
The edited production will air on September 11, 2021 at 7pm. Ticket holders will receive a link to the show good for 1 week. 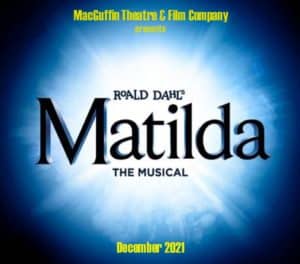 Roald Dahl’s Matilda
The Musical
Book by Dennis Kelly, Music & Lyrics by Tim Minchin
Choreography by Liz Fredette
Directed by John Rea
Matilda is a little girl with astonishing wit, intelligence and psychokinetic powers. She’s unloved by her cruel parents but impresses her schoolteacher, the highly loveable Miss Honey. Over the course of her first term at school, Matilda and Miss Honey have a profound effect on each other’s lives, as Miss Honey begins not only to recognize but also appreciate Matilda’s extraordinary personality. Matilda’s school life isn’t completely smooth sailing, however – the school’s mean headmistress, Miss Trunchbull, hates children and just loves thinking up new punishments for those who don’t abide by her rules. But Matilda has courage and cleverness in equal amounts, and could be the school pupils’ saving grace!
Premiering December 2021
Adults: $20
Students (under 18): $15
Auditions for actors ages 8 – 18 will be on Monday, September 13 from 6-8:30 PM. More details under Auditions.
BUY TICKETS

“At MacGuffin you are never too young to show leadership.”

See our Classes page for more information and registration.